skip to Main Content
How we can help you?

Our team will support you as quickly as possible

The contract for three new and significantly larger boarding bridges is part of a modernization project to enlarge the quay of the Cruise Terminal with 20 meters into the river Weser.

Barcelona, 15th December 2021 – ADELTE, a Spanish engineering group based in Barcelona and the world leading specialist in the design and manufacture of Seaport Passenger Boarding Bridges for Cruise and Ferry Terminals has been contracted by Bremenports GmbH & Co. KG to design and manufacture three PEGASUS Seaport Passenger Boarding Bridges (SPBBs) and to install these bridges at the Columbus Cruise Center in Bremerhaven.

The installation of the three new SPBBs complements the new Columbus Quay construction project that began last month. The quay, through which cruise shipping is handled in Bremerhaven, will be rebuilt over a length of 620 meters and enlarged by 20 meters into the Weser by autumn 2023. The PEGASUS-type SPBBs will therefore be longer than the current three bridges, which were installed almost two decades ago. With the new bridges, the Columbus Cruise Center can accommodate any large cruise ship, including those with overhanging lifeboats. ADELTE will install the first SPBB by the end of March 2023 and the other two before September 2023.

Robert Howe, Managing Director Bremenports welcomed the cooperation with ADELTE. “The new construction of the quay will not only improve cruise passenger access to the ships. The visually attractive and technically ultra-modern bridges will be a clear expression that Bremerhaven offers the best conditions for cruise ships”. 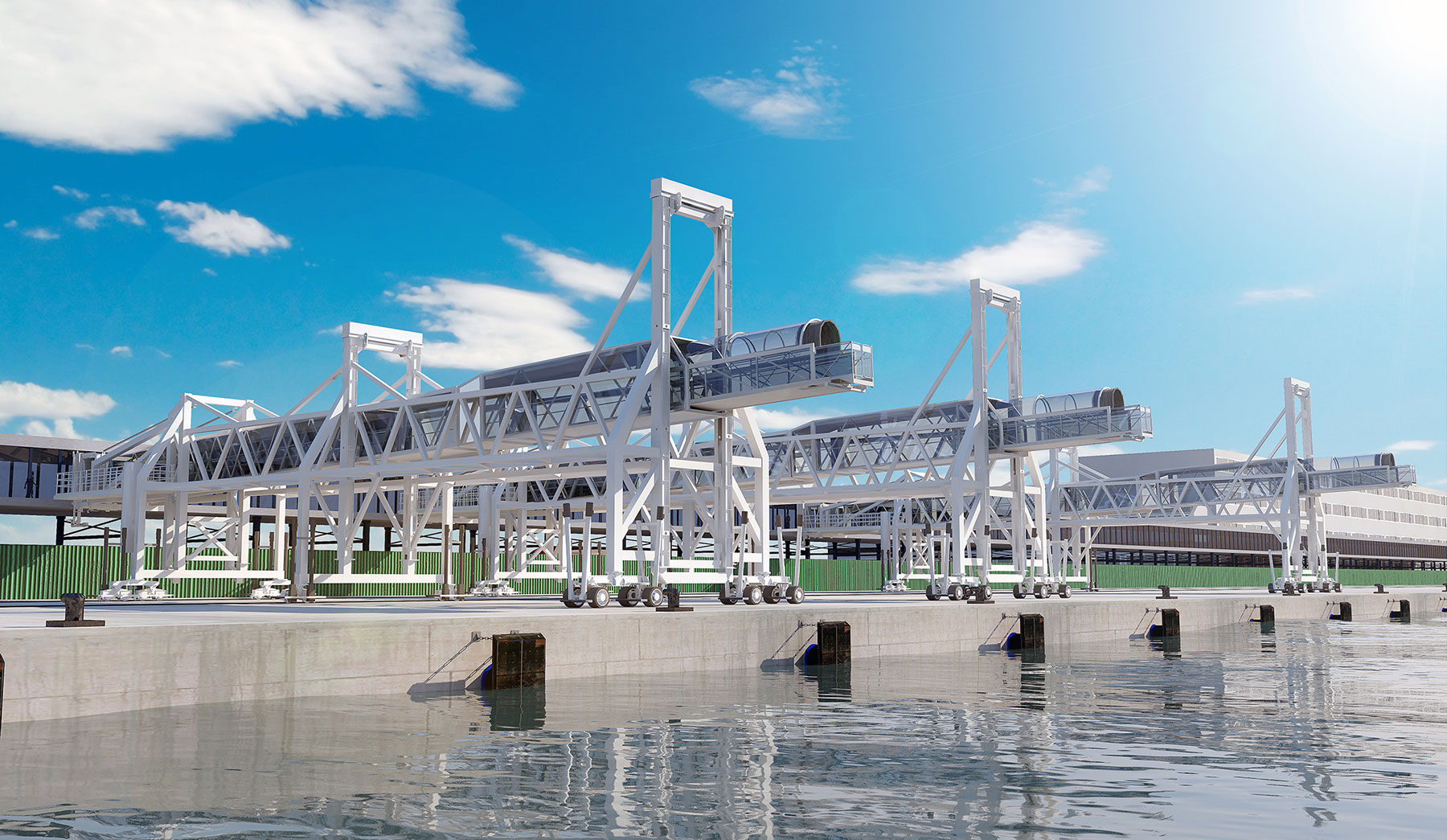 Perpendicular to the berthing line installed, these PEGASUS type boarding bridges with a length of 56 meters will be the largest ever created. The SPBBs will be composed of two glass sided tunnel sections, a cabin, and a building connection module. The cabin is the most technologically sophisticated part of the SPBB, and can compensate all the movements of a cruise ship when it is docked. Electromechanical elevation systems in the columns allow the SPBBs to reach a boarding height of 16 meters over sea level. The three SPBBs move longitudinally along the quay, allowing the boarding from any door position of the Cruise Terminal building. With embarkation, cruise guests will be able to enjoy full views of the cruise ship and the quay. Finally, the bridges will be designed and constructed to resist flooding and to ease maintenance tasks.

When the three SPBBs are installed in Bremerhaven, ADELTE will have a total of nine SPBBs installations at German ports (currently three in Kiel and three in Hamburg) During the current pandemic ADELTE has delivered a total of eighteen (18)  SPBBs to Cruise and Ferry Terminals around the world; three to Port Canaveral (USA), three to Port Miami (USA), one to Boston (USA) two to Brisbane (Australia), four to Dubai (UAE) two to Southampton (UK) one to Québec (Canada) one to Calais (France) and one to Kobe (Japan).

Barcelona 18th November 2008 – ADELTE’s Global Services has been awarded a contract by AENA,…

This website uses cookies to improve your experience while you navigate through the website. Out of these cookies, the cookies that are categorized as necessary are stored on your browser as they are essential for the working of basic functionalities of the website. We also use third-party cookies that help us analyze and understand how you use this website. These cookies will be stored in your browser only with your consent. You also have the option to opt-out of these cookies. But opting out of some of these cookies may have an effect on your browsing experience.
Necessary Always Enabled
Necessary cookies are absolutely essential for the website to function properly. This category only includes cookies that ensures basic functionalities and security features of the website. These cookies do not store any personal information.
Non-necessary
Any cookies that may not be particularly necessary for the website to function and is used specifically to collect user personal data via analytics, ads, other embedded contents are termed as non-necessary cookies. It is mandatory to procure user consent prior to running these cookies on your website.
SAVE & ACCEPT